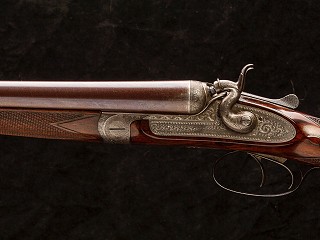 Have you ever shot Helice? Find out more about The Hurlingham Cup, and the origins of our sport...

In 1867 an experienced pigeon shooter named Frank Heathcote approached Richard Naylor, the owner of Hurlingham House and its estates, and wished to hold shooting matches within the grounds. A license was granted and the first competition was held in 1868.

As the club grew and became increasingly popular it was opened up to non-shooting members, as well as ladies, and other pursuits and pastimes were introduced. By July 1871 there were 275 shooting members and 493 non-shooters.

As the times and social norms changed, it was decided by some of the club members that live pigeon shooting was inhumane and “not at all credible to the Club”, and in December 1905 it was banned from the grounds.

The Hurlingham Club continues to this day to be a private members club based in Fulham, London. The beautiful house is surrounded by a sea of picturesque countryside and provides a haven of peace and quiet, social gatherings and sporting pursuits, away from the hustle and bustle of the city. Although the Club has evolved over time, it still owes its existence and success to Mr Frank Heathcote and the original pigeon shooters.

In the past live pigeon shooting was a popular sport of the aristocratic and wealthy, with matches being held all over the world. The feelings of The Hurlingham Club members were echoed by the general public and by the turn of the 20th century the sport had fallen out of favour and was largely abandoned. In 1921 it was banned all together in the United Kingdom. The pastime of clay pigeon shooting that we all enjoy today is a descendant of this controversial sport. This can be seen especially clearly in disciplines such as Helice.

Helice has been described as “skeet on steroids” and is a fast-paced shooting challenge. The targets are not like normal clay pigeons, they are circular plastic discs held in a plastic frame with two propellers. The basic rules of most helice shoots are that the inner disc must be shot free from the propeller casing and land within a marked area. The targets are released quite randomly and, because of their shape, fly very erratically, twisting and turning much like a pigeon in flight.

The Hurlingham Cup will be inspired by this exciting discipline and involve 5 traditional helice targets. Competitors will have full use of the gun on each target and, in order to score points, they must shoot the target and separate the inner plastic disc from the outer casing. The inner disc must land within the boundary fence. There will be up to three points on offer for each target – if the shooter successfully hits the target in the correct way stated above with the first barrel, they will be awarded 3 points. If they successfully hit the target in the correct way with the second barrel, they will win 1 point. A miss will equal 0 points.

This competition is something completely different from the English Sporting, Sportrap and FITASC shoots the AGL Team are used to running, and we are incredibly excited to give it a go. If you would like a bit of fun, a big challenge and a taste of traditional shooting, then we highly recommend joining us!

The Hurlingham Cup will be run alongside The British Side By Side Championship here at our shooting ground on Saturday 31st August. It is a separate event so you do not have to enter both if you don’t wish too, although they will both be incredibly good fun! The Hurlingham Cup will be run from 9am to 3pm, with entries being taken on the day for £10. Everyone is welcome to have a go, but in the spirit of representing the traditions of this sport, only competitors shooting a British made side by side will be eligible to win. Our winner will walk away with 500 Lyalvale Express cartridges and a trophy, as well as getting their name engraved on the legendary Hurlingham Cup!

We will have an experienced helice shooting team available on the day to explain the rules and offer guidance and advice, but if you have any questions in the meantime please don’t hesitate to get in touch on the details below.

Click the links below for more fascinating information on The Hurlingham Club...